The CASA Maryland Campaigns teams led and contributed to several successful policy campaigns – and we won MAJOR victories for immigrant families! Special thanks to everyone from every single team that testified, connected with allies, helped with research and questions, organized students and so much more. It took countless people and the dedication and energy of all CASA staff to make this happen.

Together, we passed legislation to end private immigration detention in Maryland, stop ICE from abusing driver’s license information, get more money in the hands of immigrant families in need by expanding the EITC to ITIN holders, set up a Governor’s Office of Immigrant Affairs and so much more. Below is a full recap of all the bills we passed:

Dignity Not Detention Act (HB16) – (with additional policing protections for immigrants) – The Dignity Not Detention Act ends any State or local involvement with ICE detention in Maryland by:  1) prohibiting private ICE detention in Maryland, 2) ending existing agreements between counties and ICE to detain immigrants effective October 2022, and 3) prohibiting state or local governments from entering into new agreements to detain immigrants.  In addition, the Dignity Not Detention Act incorporates some of the policing protections from the TRUST Act (which unfortunately did not pass), including: 1) prohibiting law enforcement from asking about citizenship, immigration status, or place of birth during a stop or arrest, 2) prohibiting police from taking any action (including detaining an individual or prolonging questioning) based on a civil immigration violation, and 3) prohibiting police from coercing, intimidating or threatening an individual based on their perceived or actual immigration status or that of a family member.

Driver Privacy Act (HB23) – The Driver Privacy Act requires that ICE officers get a warrant before searching data or scanning photos held by the MVA or other Maryland agencies. Under this bill, ICE will NOT be able to abuse the private information of Maryland drivers.

EITC Expansion to ITIN Holders (SB218) – Governor Hogan passed the RELIEF Act excluding ITIN taxpayers from critical relief, but we fought to get even more relief to ITIN holders through this bill. This bill extended the Earned Income Tax Credit (EITC), a credit that certain taxpayers can apply for when filing their taxes, to ITIN holders (for the next three years). Only two other states other than Maryland have voted to do this. We are looking forward to fighting to ensure that this expansion is permanent.

Flower Branch Act (HB345) – Many of us remember the explosion at the Flower Branch Apartments in Silver Spring that killed seven people and injured approximately 70 residents, many of them CASA members. This bill implements one of the National Transportation Safety Board recommendations made after investigating the explosion: requiring the installation of new service regulators outside of structures and relocating them outside.

Access to Counsel (HB18) – As many of you know, we fought hard for a “right” to counsel for individuals facing eviction. While we weren’t able to achieve a right, we were able to expand access to representation for tenants facing eviction. This bill directs the Maryland Legal Services Corporation in consultation with a taskforce to expand representation to all income-qualified tenants. Note that this bill has a target completion date of Oct. 2025.

The work continues on… the COVID-19 Eviction and Housing Relief Act (expansion of eviction protections, prohibit late fees during the state of emergency, etc.).

Anton’s Law (SB178) – In honor of Anton Black, a 19-year-old teenager who died in police custody, this bill reforms the Maryland Public Information Act to remove the complaint file from the personnel record category, thereby allowing the police department to disclose the complaint file in appropriate situations so that communities know whether police misconduct is being investigated.

Local Control of Baltimore City Police Department (SB786) – This bill establishes an advisory board that will study the transfer of control from State to the City including the implementation, management, transfer of personnel, etc. Once their recommendations are completed, local control will be on the Baltimore City ballot in 2022 or 2024 (for implementation in 2023 or 2025). Our Baltimore team will be working hard to ensure that this passes as a ballot measure successfully.

LEOBR Repeal – The Maryland Police Accountability Act, among other things, included a repeal of the Law Enforcement Officer’s Bill of Rights (LEOBR). LEOBR is a special set of rights that make it more difficult to hold police officers accountable for their misconduct. The LEOBR repeal includes some aspects of civilian participation in the process of holding police accountable, but we still must continue our advocacy for full community oversight of the police.

Use of Force Standard – The use of force statute raises the legal standard to authorizes police officers to use force when only when it is necessary and proportional.

The work continues on… Counselors Not Cops Act and Police-Free Schools Act (legislation to remove school police from public schools and reallocate funding to mental health services and other critical school resources.

Maryland Essential Workers’ Protection Act (HB581) – The major provisions of this bill: 1) requires essential employers to provide safe working conditions 2) requires the Department of Health to use a template emergency preparedness plan 3) provides 14 days of Public Health Emergency Leave, conditioned upon the availability of state of federal funds 4) includes the right for essential employees to refuse or engage in unsafe work conditions 5) requires essential employers to provide free testings (unless free testing is available elsewhere) and 6) requires Maryland Occupational Safety and Health (MOSH) to develop an emergency temporary standard if OSHA does not solidify an emergency temporary standard two weeks after the effective date of this legislation.

The work continues on… delivering hazard pay to essential workers, expanding additional sick leave for those impacted by the pandemic, etc.

Blueprint for Maryland’s Future (Veto Override) – Last session, the legislature passed the Blueprint for Maryland’s Future, landmark legislation to improve Maryland’s public school funding formula and major policies. This session CASA fought to successfully override that veto! The bill 1) expands all day pre-K to all eligible 4-year-olds by 2026 2) strengthens college and career readiness standards that include automatic enrollment, which have historically shut out Latino students from excelling in advanced courses 3) mandated state funding for school-based health centers in MSDE from $2.5M to $9M. 4) the new funding formula increases the weights associated with compensatory education, special education, and English language learners 5) creates and expands concentrated poverty grants to provide more services for students in high poverty areas and 6) so, so, much more.

READ ABOUT OUR VICTORIES

Read about the journey to passage of the Driver Privacy Act and Dignity Not Detention in theAssociated Press,Washington Post,Aldia News,DCist,Maryland Matters,WTOP,International Business Times,the American Prospect,Frederick News Post, and a live 6 AM standup withGood Morning Washington.

Marylanders: if there ever was a time for you to show up for immigrants, it's NOW! The MD Senate hasn't moved ANY immigration reform bills. 😱❗

This session, immigrant activists and allies made major strides in digital advocacy. CASA’s

Countless CASA members provided testimony on numerous bills. CASA member, Nora, who after her car broke down was transferred to ICE by the police (which ended in several months of detention and ultimate deportation) testified from El Salvador in support of the Dignity Not Detention Act. Once the Dignity Not Detention Act is enacted, there will no longer be a situation like hers to lawfully happen again.

CASA participated in and led in organizing one of the biggest police reform events in Annapolis, calling for legislators to pass the strongest possible protections this session. Seephotos andhighlights here. 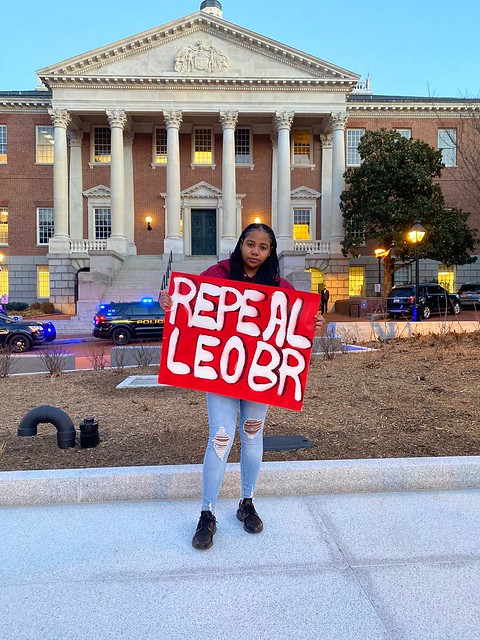 Over the course of two weeks, CASA hosted five successful virtual lobby nights in our week long “Semana del Inmigrante”  attended by several legislators and hundreds of CASA members from across the state. CASA members shared their stories, asked questions and directly advocated with their legislators in support of these bills.

Prior to the legislative session, CASA hosted five well attended virtual teach-ins to educate partners about each of our priority bills and how to effectively advocate in Annapolis. These teach-ins were critical to ensuring other advocates had a strong understanding of each bill and its purpose.

Our work to deliver this successful legislative session started long before the session started. This summer, our statewide Cancel the Rent campaign and Special Session campaign played a MAJOR role in setting the stage for our successes this session. While not all of the demands of those campaigns were met, we galvanized support from partners and set clear priorities for legislators.

CASA was a member of several statewide coalitions to achieve this work including the Maryland Coalition for Justice and Accountability, Maryland Alliance for Racial Equity in Education and Renters United Maryland.

Watch @DelegateStewart make a case for #DignityNotDetention on the House floor & share the story of Pedro Ordoñez. The House voted with a veto-proof majority to stop using the detention of immigrants as a revenue stream. @MDSenate, Pass #DignityTrust #HB16 before it's too late. pic.twitter.com/CMpNbJx3lv

🚨 Watch Delegate @RobbynLewis46th speak passionately in support of #DignityNotDetention, sharing the story of Roxana Santos. The House passed #H16. @MDSenate we need you to pass #DignityTrust out of JPR immediately! #MDGA21 pic.twitter.com/MEuXkuy0JU