Stories from the Struggle: #ProtectBlackImmigrants

This message was sent to our Friends of CASA via email on February 11, 2021. Stay connected and up to date on the work CASA is doing to serve the immigrant community — join in here.

Did you miss the #ProtectBlackImmigrants rally on Wednesday? CASA stood in solidarity with more than 50 Black immigrants, allies, and partner organizations like African Communities Together (ACT), Haitian Bridge Alliance, UndocuBlack Network, and others to call to end deportation, empty detention centers and bring back people who were unjustly deported, in front of the MLK Memorial in Washington, D.C. We rallied to remember the Black immigrants who have been deported, especially during Black History Month. If you missed the event, you can re-watch the live video that was streamed on Facebook Live.

So many powerful stories were shared. One CASA member, an immigrant in his early thirties from Cameroon, who preferred not to share his name, shared his story of how he lead a peaceful march, became a target of the military, and ultimately had to leave Cameroon. As a member of the Eastern Cameroon National Council, the member led a march to protest the assimilation, colonization and the second class status forced on them by the French dominated government of the Biya region. But during the protest, he was targeted by the military, shot in the abdomen, and fled with a friend to a hospital where he hid for ten days. While in hiding, the military had gone to his home, beaten his mother, and burned down his house. His friend was also tortured and killed. It was upon hearing this news our CASA member knew he had to flee. 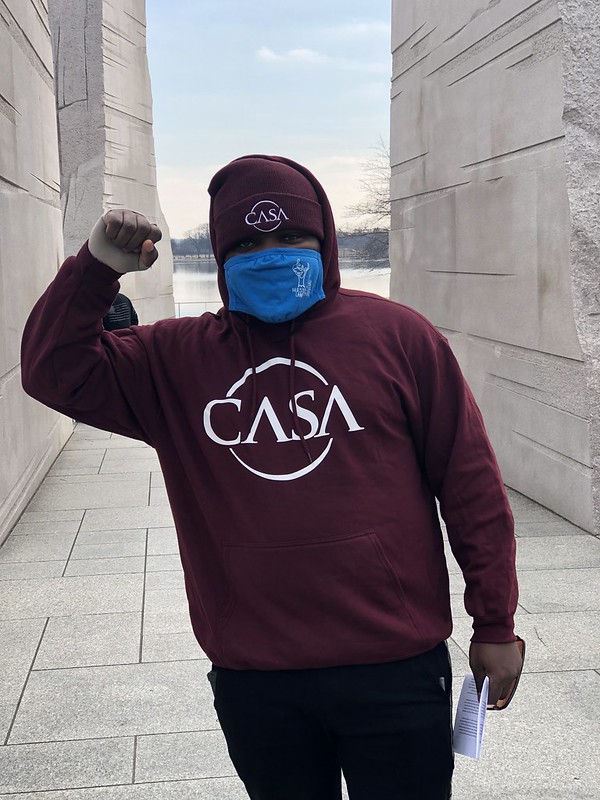 “I finally entered the U.S. through the Brownsville port of entry where I was handed to the customs and border patrol by the Mexican immigration officers and for the first time since October 2018, I felt safe and protected…I will not only be killed if I return to Cameroon by the barbaric military of president Biya who has been in power since 1984, but I will be severely tortured before I am killed. My story is not unique. Many others from Cameroon are suffering just like me…It is not easy for us to escape and leave our families behind.”

The story of this member — who is now asking for TPS for Cameroon and worrying about his wife, son, and mother who are all back in Cameroon — as he notes, is not a unique story. This is why the list of demands to #ProtectBlackImmigrants are:

Every Wednesday, for the first 100 days of the Biden Administration CASA will be hosting actions to push the administration and Congress to act swiftly on immigration reform and ensure a pathway to citizenship for all immigrants. Don’t worry if you can’t join in person. You can still take action by calling your member of Congress to pass legislation that would include a path to citizenship for immigrants currently in the U.S.

Can’t make the events? Take 5 minutes to call your member of Congress in support of a pathway to citizenship!