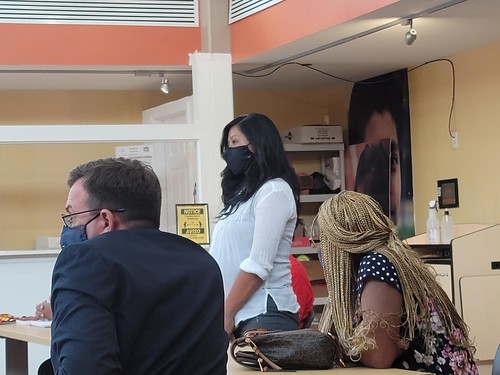 HYATTSVILLE, MD – CASA, the Mid-Atlantic’s largest immigrant member organization, opened its doors to welcome Ambassador Linda Thomas-Greenfield, the U.S. Representative to the United Nations.  Diverse immigrants shared their stories in the hope that the political and social upheaval faced by their communities would assume a central importance in our engagement with foreign governments.

Several CASA members presented their stories. They were surrounded by additional supporters from the community excited to meet with Ambassador Thomas-Greenfield.

Speaking first were recent Cameroonian immigrants escaping escalating and extreme political violence in Cameroon. Both had been targeted for their political work; one accused of engaging in Anglophone separatist activities, an accusation utilized by government forces against any individual who is organizing for improved conditions, and one for fighting for improved health conditions for prisoners. They and family members faced imprisonment, torture, and more. Neither speaker felt comfortable sharing their names because of the real threat of violence to their families still in Cameroon.

Ambassador Thomas-Greenfield also heard from Norma Rodriguez Grande, a CASA member from Honduras. Norma described how the lack of effective government left her family subject to threats and extortion by criminal gangs. She had to flee with her ten year old son first to the countryside of Honduras then to the United States.

Also speaking was Nayireth Castro. Nayireth described the discrimination confronting Afro-Colombian communities. Afro-Colombians have been displaced from their lands, abused in their workplaces, and live largely in regions that (together with Indigenous communities) faced the highest level of violence during the war and continue to have their human rights violated by government, paramilitary, and narcotrafficking entities despite the Peace Accord.

“Public officials like Ambassador Thomas-Greenfield play a vital role in driving social perceptions and with her presence today she is sending a critical message, to my community, of equality, tolerance, and respect,” said Ms. Castro.

Ambassador Thomas-Greenfield thanked the CASA members for sharing their stories and for their advocacy on behalf of immigrants and refugees.

“I share President Biden’s belief that America must stand as a ‘beacon of liberty and refuge to the world.’ The CASA community keeps that beacon lit. You embody these core American values,” Ambassador Thomas-Greenfield said. “This week marks the 70th anniversary of the Refugee Convention, which the United States played a leading role in drafting, and I’m proud to be among people working to sustain America’s leadership today.”