Media outlets may download photos and b-roll at: https://flic.kr/s/aHsmWDZKD2
Photo credit may be given to “CASA” 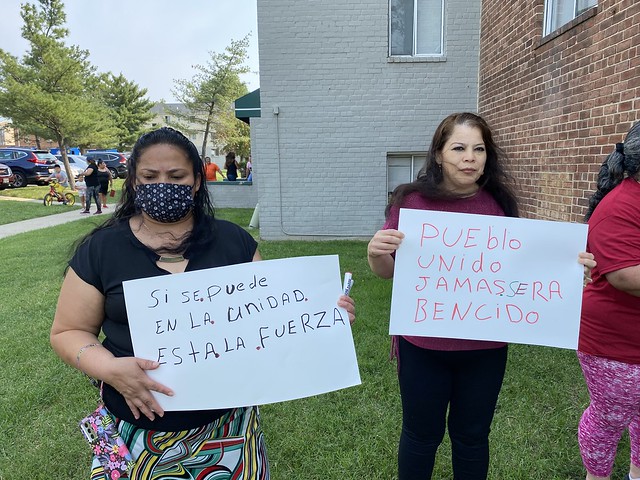 Hyattsville, MD — Impacted community members and issue experts from immigrant and Latino organization CASA spoke out on Monday morning against the proposed zoning changes in Prince George’s County. Changing the zoning would fast-track gentrification in Langley Park, a predominately Latino neighborhood, and would essentially provide a huge payout worth millions for landlords who haven’t kept their promises on the housing they currently own.

The residential zones that are predominantly affected by the changes in zoning are apartment zone R-18. These areas have the highest concentration of low-income residents in Langley Park. The majority of the families who currently live east of the Purple Line are rent-burdened, meaning they spend over 35% of their income on housing. Upzoning will only make this area more expensive to rent. The new zoning guidelines – from the maximum height limits to the limits on the number of dwelling units per acre – are intended to encourage the development of low- to mid-rise luxury apartment buildings, thus gentrifying the area and pushing out the residents who already reside in Langley Park and bolstering the pockets of landlords in the area.

The public hearings for the zoning changes begin Monday afternoon. The zoning laws, which were stalled a year due to COVID-19 and major ethical concerns with council members taking developer political donations.

“We request that the County amend the Countywide Map Amendment to apply the Neighborhood Activity Center (NAC) zone instead of the proposed Local Transit-Oriented (LTO) zones to the Takoma/Langley Crossroads. The County has a responsibility to ensure bad actors and delinquent property owners aren’t profiting from being upzoned with substantially greater density per acre. What is happening in Langley Park is a microcosm of what is happening in low-income minority communities across the United States,” said Ashanti Martinez, CASA Research and Policy Analyst.

“I’ve been living here in Langley Park for twenty years since I arrived from Mexico. I raised my son here and some people said the area is bad, but I’ve been lucky to not have issues. Where will we go if we are forced to pay more rent here? Where are we, the poor, going to live?” said Isabel Espinoza, CASA member, and Langley Park resident.

“I’ve been here for eight years in Langley Park. I like living here because everything is central including stores, buses, and CASA. Of course, the conditions of the apartments aren’t great, but I would never want to leave this area. I will fight to the end to not be displaced from Langley Park. There is nowhere else we could go,” said Elida Martinez, CASA member, and Langley Park resident.

With over 115,000 members across the states of Maryland, Pennsylvania, and Virginia, CASA is the largest member-based Latino and immigrant organization in the mid-Atlantic region. Visit us at www.wearecasa.org and follow us on Twitter at @CASAforall.